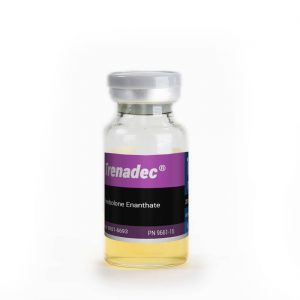 Trenbolone enanthate, known by the nickname Trenabol, is a synthetic and injected anabolic–androgenic steroid (AAS) and a derivative of nandrolone which was never marketed. It is the C17β enanthate ester and a long-acting prodrug of trenbolone. Trenbolone enanthate was never approved for medical or veterinary use but is used in scientific research and has been sold on the internet black market as a designer steroid for bodybuilders and athletes.

Trenbolone as the base hormone is an extremely powerful hormone, approximately 5 times the strength of Testosterone in both anabolic and androgenic strength, making Trenbolone an extremely potent anabolic steroid. Roussel-UCLAF was the firm during the late 1960s to initially synthesize and investigate Trenbolone, first with Trenbolone Acetate, and then with other long-acting Trenbolone esterified variants. The interesting aspect of Trenbolone’s history is that Enanthate was not specifically researched by Roussel-UCLAF, though was metaphorically ‘on the backburner’. It was never officially manufactured as an FDA-approved (or any equivalent) pharmaceutical drug meant for human use or sale on the prescription market. The other two variants of Trenbolone (Acetate under the brand name Finajet/Finaject and Hex under the brand name Parabolan) both experienced brief periods of official sale and use on the pharmaceutical drug market, although briefly. Trenbolone Acetate’s life on the pharmaceutical market was short lived in the 1970s, while Parabolan reigned briefly during the 1990s. It was not long until they were pulled from the market and their status as human-use prescription drugs stripped. Trenbolone Enanthate, on the other hand, would surface much later on in 2004 as an underground lab (UGL) product, made by British Dragon and sold as Trenabol.